A Sketch of Forgotten Stars 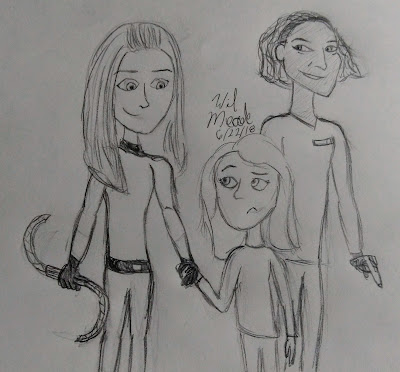 I just now realized the title of this post sounds like click bait, but no. It's a pun on the name of the book series these three characters come from, A Song of Forgotten Stars, by Mr. Kelly Sedinger. I just finished the second book in the trilogy, and it did not disappoint. In brief, it's a sci-fi fantasy story set in the distant future about two star empire princesses who crash land on a remote planet with an unusual connection to a heritage of theirs they never knew about. It's kind of like Star Wars but with much less samurai influence and much tighter storytelling. The three main characters, pictured above from left to right, are Princess Tariana, Princess Margeth, and their protector Lieutenant Rasharri, who remains my favorite character in the series so far.

When I read the first book there was no way I could draw the characters well. Now that I've improved a little I wanted to draw them as best I can. I still can't draw them as well as in my head, but it's fine. I based the portraits on the cover art for each book and filled in the gaps with how I've been picturing them. I didn't add as many details as I wanted though because A: I'm not good with details on cartoon drawings and B: there's no way I would get them all how Mr. Kelly intended them to be. I wanted to try to draw an illitar though. That's the weapon Tariana's holding in her hand. I actually picture the blades as being a bit bigger, but you get the idea. It's a throwing weapon common on Xonareth (the alien planet), and it is pretty cool. Also I drew Tari in how I picture her flight jacket, and I also included Lieutenant Rasharri's blazegun (again, my mental image of it) for fun. I also wanted to include Margeth's musical pipes but ended up not doing so. Side note: I've been including pupils more and more in my characters. I'm still not very comfortable with it, but I've enjoyed it! I'm personally very honored to have tried to draw something from this book at all. Part of me wants to make an animated movie series of this trilogy someday.

I hope one day God makes my projects at least as good and well done as Mr. Kelly's work. God's will be done.
Posted by Wil Meade at 9:44 AM